This is a bit of a follow on from another users question found here: SD card cloning using the dd command

I have used the dd command to clone or make backup copies of SD cards with limited success. These are for single board computer projects of mine, where it is prudent to fully backup the SD card now and then. I say limited success because at times, I have been able to do a full restore of a system (card) using the advice found online.

Note however that at other times this has not been the case, and I am wondering whether it has something to do with the mounting (or ideally unmounting of the card as there is some confusion here (for me anyway).

Question 1: When I run umount (as suggested in the above mentioned forum page) it reports that the device is not mounted. Is that because it just unmounted the device, or because the device I have specified to unmount doesn't exist to be unmounted in the first place?

To unmount, I use the following command: sudo umount /dev/sdc

Question 2: In the Ubuntu 16.04 (Files) GUI utility, the USB memory stick or SD card inserted in USB has a little upwards facing arrow to the right of it. If you click on this, it effectively disconnects the device and makes it safe to remove. Is this the same as unmounting in the CLI? It does not appear to be the case, as when I have done so, the dd command kicks up an error that it can't find my device to create an image of. If I unplug the SD card (USB) and then plug it back in, The SD card is shown once again with the little arrow, and I can use DD without issue to create the image (though whether the image is any good is another question, as I still don't know whether or not it was actually unmounted prior to image generation!) 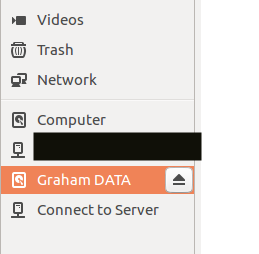 Question 3: When I run sudo fdisk -l, I see my card listed as sdb, however if I use the disks utility, I see the SD card actually consists of at least 3 partitions (SDB repeated for 2 of the partitions, and SDB1 for the bulk or main partition). Which partition am I to select as part of the dd operation? Won't dd limit itself to only making an image of that partition, ignoring the rest of the SD card? If so it's not really relevant to call it a disk imaging tool as such...

Finally, this is the dd command that I run to create a compressed image of the SD card (When I get this right, it works perfectly, and Etcher has no issues reading the zipped image too)

Your assistance is appreciated for somebody who is still learning the ropes with Linux, even after several years of use and experience so far.

When using dd to copy block devices we need to be aware of the fact that it is a low level tool for bit per bit copying data.

This very powerful tool will copy each and every bit from the source to any destination.

Because dd also does not allow incremental backups and takes considerable time I would suggest you have a look at those many different backup solutions we have to possibly find one that suits your needs better than dd.

To still answer your questions:

would unmount a file system that is created directly 'in the whole drive' like in old floppy disks. Today we usually create partitions /dev/sdxn and create file systems in the partitions, where x is the drive letter and n is the partition number, so a more relevant command would be

or for all partitions in sdc

The 'arrow' you are referring to is the eject symbol, and it will not only unmount a USB pendrive or memory card but also turn off the power for it. You need to unplug and replug the pendrive or card in order to get the power back, so that you can mount it again (maybe it automounts).

This is different to what you do with the umount command. I think the udisks software is called from that eject symbol. See

which describes a command line utility for it.

Clone a whole drive to clone the whole operating system. You should use the source device /dev/sdx, otherwise you are only cloning a partition and it will not contain the whole system. There should be a drive letter but no partition number. You can also use Clonezilla or mkusb to clone in a safer way (dd is dangerous).

If you want to use dd anyway, you should start by unmounting all partitions on the drive,

and after that the command line that you show in the edited question should do the job,

and if I understand correctly, it works for you (to create a compressed image file, that can be used to restore the system).

Not the answer you're looking for? Browse other questions tagged command-line mount sd-card dd or ask your own question.

24
Why do I need root privileges to umount a drive at the command line, but not in Nautilus? How to change that?
53
SD card cloning using the dd command
3
ubuntu 14.04.1 mounts /dev/sda1 and asks to unmount while partitioning
0
How to securely/non-interruptively remove a device after overwriting partition table with dd?
3
How can I mount an ejected USB drive without unplugging it?
0
SD card partitions not visible on Ubuntu
0
Can't mount back OS disk partition (no /dev/sda)
0
umount multiple mountpoints under same directory
6
“Re-size” the .img for smaller SD-card. How to SHRINK a bootable SD card image