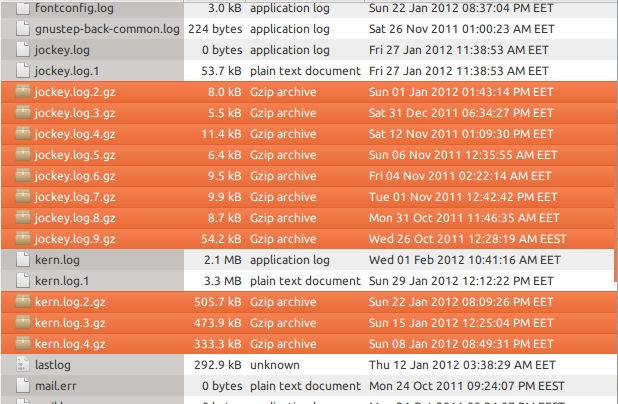 2
how do I clear out log files and such
6
Server logs are filling my hard disk, how do I fix this?
4
Ubuntu Server /var/log crazy disk usage
0
Root partition full in 1 minutes
1
Which files should I remove from /var/log directory to free space in Ubuntu 16.04?
0
No enough space
1
Linux keeps on Logging and freezing after entering password

35
Can I delete /var/log files due to low root space?
21
Check how space is distributed on a Linux system
1
How can I free space on my netbook?
2
Root partition filling up
7
My root partition keeps filling to 100% capacity, but I can't figure out why!
1
Which files should I remove from /var/log directory to free space in Ubuntu 16.04?
0
How can I safely purge the archival contents of /var/log and how do I change log retention policies?
1
How can I free some space in /var/cache/archives/
7
syslog.1 and kern.log.1 filling up with same message
1
log rotation for /var/log